We are pleased with the progress we’ve made on both the digital assets and reinsurance sides of the business. As always, please reach out to us any time if you have any questions or would like more details on our update.

Our auditors, Grant Thornton, have commenced their audit planning process for Ascendant’s first audit. We expect the audit for the period from inception to December 31, 2020 to be completed by June 30, 2021. Once available, we will provide each shareholder with the audited financial statements.

With Ascendant, we set out to create a reinsurance business to produce steady cash flows and match it with digital assets, which although are volatile they have ability to produce outsized returns.

Last update we mentioned the massive growth of the United State’s Debt to GDP ratio. We see a similar story across many countries with Canada leading the pack, nearly doubling its Debt to GDP ratio over the last 3 quarters.

Why does this matter? At today’s ultra-low interest rates, (some) countries are able to service their debt primarily with revenue (taxes) while others are going to the printing press. However, what happens when rates start to rise? The United States interest rate is currently 0.25%, far below the 50 year average of 5.56%. 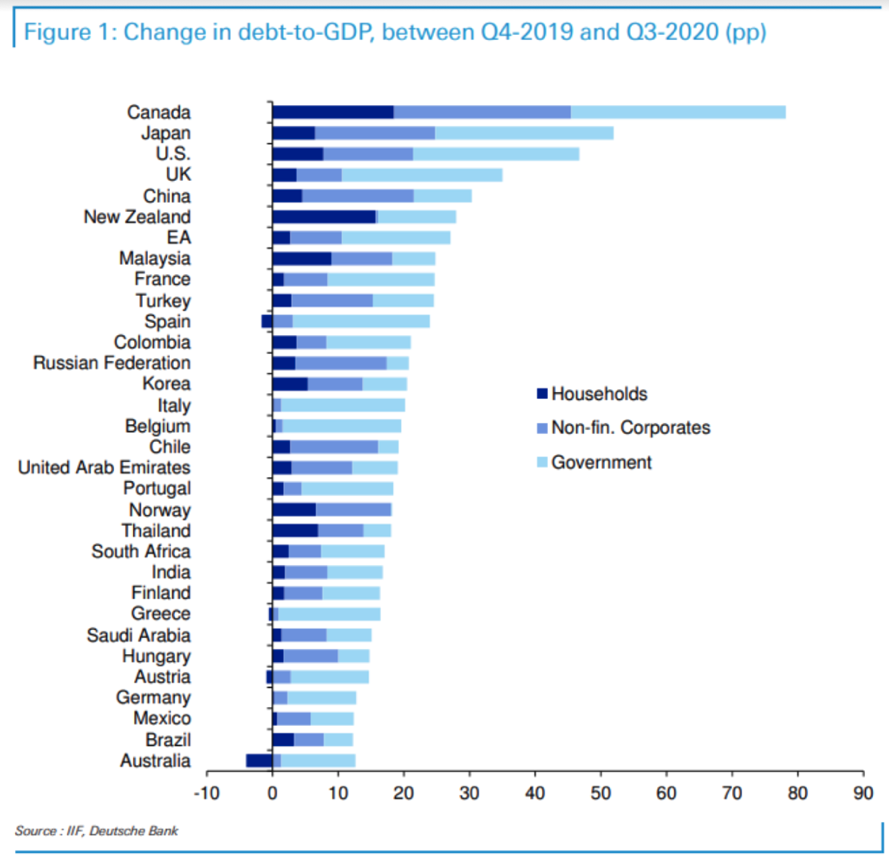 Political leaders are unwilling to face the reality of what will happen when interest rates start to climb – either due to sheer ignorance or as a “future generations” problem. As an example, this video shows Canada’s Minister of Finance refusing to disclose what Canada’s debt payments would become with only a 1% increase in interest rates, still far below the historical average.

From our perspective we see only 3 options on how this story can end:

Bitcoin’s properties make it the hardest asset in existence. Bitcoin’s immutable 21 million supply cap means that no individual, corporation or government is able to artificially inflate or change the 21 million bitcoin supply at the expense of Bitcoin holders. This fixed supply stands in stark contrast to Fiat currencies. Twenty-two percent (22%) of U.S. dollars were created in 2020 which will likely result in some form of disproportionate benefit to the “haves” vs “have nots” (in other words – we’re seeing the Cantillon effect in action)

This message is growing. As of writing Bitcoin price is nearing its all time high of $19,700 while it’s market cap of $350bn (price X total BTC’s mined) is at All Time Highs.

Bitcoin’s recent rally feels more sustainable than the 2017 ramp. This isn’t to say we don’t expect continued volatility in both directions, but the fundamentals supporting this rally are much stronger. Some notable highlights since our last update:

Paypal now supports the purchase and sale of Bitcoin, and will enable users to purchase goods using Bitcoin in 2021.

Public companies are adding Bitcoin to their treasuries; Microstrategy converted  $450M of USD dollars it held on its balance sheet to Bitcoin, and Square has purchased $50M of BTC (link, link)

We internally monitor our portfolio holdings and fair value on a daily basis. As of November 30, 2020 the SPV had net assets of $10,717,309. The below provides a summary of our overall SPV portfolio broken-down by liquid and private portfolio:

Our current book yield is 5.96%, net of management fees, while our cost of capital is 4.9%. This provides our reinsurance company with a 1.0% positive spread on our cost of capital. Our portfolio is leveraged approximately 10x, as a result the 1.0% spread equates to a 10.0% return. We continue to see very good yielding opportunities in residential mortgages and private credit markets in the United States that have yields between 7.0% – 9.0%.

As you will see from our portfolio allocation below, 58% of the portfolio is now made up of single issuer private debt and mortgages. As noted above, we are working to add digital assets (e.g. Bitcoin) once it is an admitted asset for reinsurance purposes. This will effectively allow us to add additional premium and the purchase of assets without adding capital to our reinsurance business. This would create additional return, without any additional capital added. We are working with legal counsel in the US that have been successful with other insurance companies in getting approval from the regulators for digital assets to be treated as an admitted asset.

The industry standard for a structure similar to ours takes approximately two years of operations before it is profitable. We are very pleased to report we are profitable in our first year of operations as of November 30, 2020.

Our insurance business is profitable and will generate steady cash flows with a return of 13-15% based on our portfolio at November 30, 2020. Our digital asset portfolio has appreciated by 105%. We continue to view the digital asset space favorably, but expect that it will continue to be volatile.

As our operations are now fully ramped up and we are profitable, we will be doing a separate reach out in the near future with details of our next fundraising effort. If anyone is interested in investing with us before this formal announcement please let us know – we now feel we are in a position to raise and deploy additional capital effectively and we would be thrilled to have existing investors increase their exposure.

Our insurance business is profitable and will generate steady cash flows with a return of 13-15% based on our portfolio at November 30, 2020. Our digital asset portfolio has appreciated by 105%. We continue to view the digital asset space favorably, but expect that it will continue to be volatile.

Our insurance business is profitable and is generating steady cash flows with a return of approximately 13%. We continue to view the digital asset space favorably, but expect that it will continue to be volatile. We are very pleased to report our performance to date has provided investors with nearly a 200% return. We appreciate your support and look forward to continuing to build Ascendant.

Q3 2021 Investor Update We are pleased to share our Q3 2021 Ascendant update.  As always, if you would like to discuss any of this